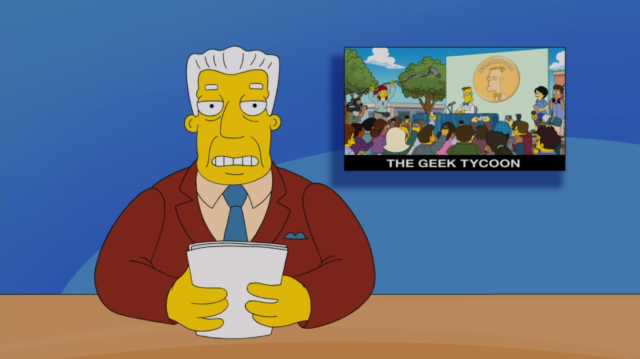 The latest episode of The Simpsons, titled Frinkcoin, briefly tackles the topic of cryptocurrency, while featuring celebrity guest Jim Parsons, who played Sheldon on The Big Bang Theory.

In the episode Lisa is writing an essay for school about the most interesting person in all of Springfield, with Professor Frink being her subject of choice. Frink then goes on to tell her about his plan to create his own cryptocurrency, but Lisa has no idea about the subject. As a way to explain things to her, Frink plays a video with Jim Parsons and a singing cartoon ledger.

In the video Parsons explains cryptocurrency as simply as possible, while mentioning how it’s recorded using a digital ledger and incorporates blockchain technology. The show also takes a slight jab at cryptocurrency, with a subliminal message but still maintains an accurate description of the technology.

“Cryptocurrency is a system that does not rely on a non-cryptocurrency central authority, but instead relies on a non-centralized distributed consensus of cryptocurrency ownership,” with the message further explaining “In this system, rules are defined for the creation of additional units of cryptocurrency. They can be generated by fiat like traditional currency or just thrown around randomly or all given to LeBron.” The message then ended with a jab at how crypto mining is allowed, but we can’t have straws.

With The Simpsons tackling cryptocurrency, people are already speculating great things for the technology since the show has had a history of eerily predicting future events, such as Trump’s presidency. Perhaps we’re getting closer and closer to mainstream adoption of the technology.

Although, the episode does mention an equation that, if solved, will render all cryptocurrencies worthless, so who knows what the future holds.