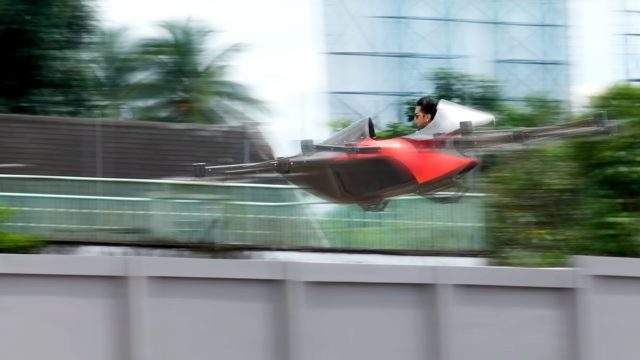 A world with no traffic seems like everyone’s dream for the past couple of decades. Imagine highways that are not congested, streets that are 100% pedestrian-friendly, and flying cars dominating the roads. Doesn’t seem realistic? Well, traffic-free expressways and pedestrians being prioritized may not happen anytime soon- but flying cars are actually closer to reality than we initially thought.

Enter ‘Koncepto Milenya’, a Filipino “flying car-like device” that is planned to be mass produced soon. Its inventor from the Philippines, Kyxz Mendiola, describes it in an interview as an “ultralight aircraft that kind of looks like a flying car which uses drone or multi-copter technology para makalipad (to fly). Parang drone siya na sasakyan (It’s a vehicle that’s like a drone)”

This one-seater “flying car” is made of lightweight carbon fiber material and weighs about 80 kilos. It can fly as high as 20 feet, and speed up to 60 kph. It has 16 motors, 16 propellers and 4 sets of batteries. It can only stay up in the air for 15 minutes, and takes up to around 2.5 hours to recharge the batteries. According to Mendiola, a 1 hour drive could be cut to 5 minutes with his vehicle.

With some more major tweaking to be done by Mendiola, and with the support of multimillion-dollar company, Star 8 (an Australian-based company specializing in electric and battery-operated vehicles and alternative energy), everyone is hoping that this invention can be commercially viable sooner rather than later.

Inexpensive emergency devices to get you through sudden car troubles