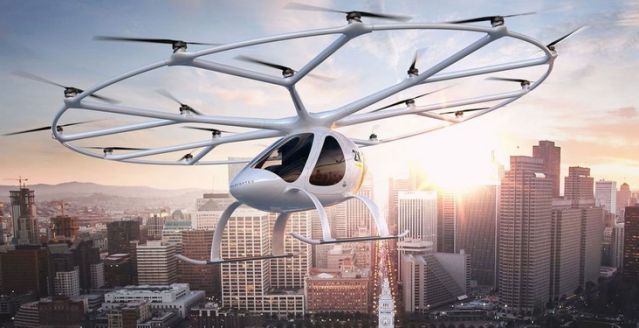 Volocopter, a German aviation startup, teams up with Grab, a major ride-hailing app in Southeast Asia, to launch an air taxi project. Both companies signed up together to “look into the most suitable cities and routes to deploy air taxis in Southeast Asian cities; evaluate the best use cases for air taxis; and explore the possibility of joint flight tests, among other things.”

Volocopter’s 2X aircraft is a small, egg-looking multicopter with a wide halo of 18 rotors. VoloPort’s landing pad is designed to highlight electric VTOL (vertical takeoff and landing) vehicles transferring from one rooftop to another in the busiest urban settings. It is proposed to be an air taxi, built to ferry 1 passenger at a time over the congested highways and roads below. Ideally, Volocopter prefers to focus on local point-to-point travel once its planned commercial flights launch in 2022, where passengers will be flown from one VoloPort to another. Their goal is to have dozens of VoloPorts across Singapore, each with the capacity to handle 10,000 passengers each day by 2035.

While the planned 2022 launch isn’t that far ahead, are we looking at the future of ride-hailing? And since we’re all waiting for the next big thing in transportation system, this might just be it.

World Leaders request for free, accessible coronavirus vaccine for everyone