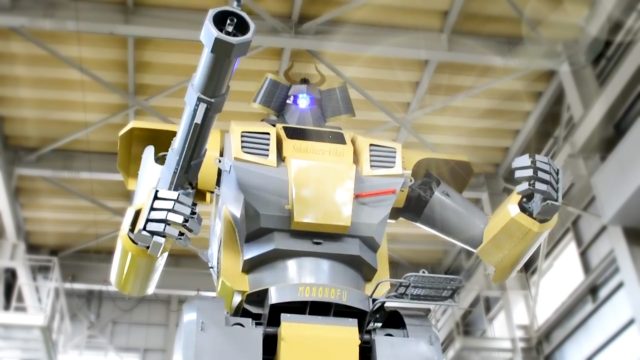 LW Mononofu is designed and manufactured by the Sakakibara Kikai Company based in Gunma Prefecture. It was made to resemble robots from Japanese anime, as explained by Masaaki Nagumo 南雲正章・開発課, LW Mononofu’s designer and creator. He also shares that the intention was to actually bring robots from anime into reality because he had always dreamed of suiting up as a robot from “Mobile Suit Gundam,” his favorite anime when he was younger.

This 28-feet tall, 2-legged robot weighs more than 7 tons, and Nagumo claims that this giant was almost single-handedly completed in a span of 6 years. It was also originally supposed to be at around 5-6 meters, but because there needed to be a cockpit, the height needed to be adjusted and increased. LW Mononofu also features a bazooka-like air gun on which shoots sponge balls at around 87 mph.

“As an anime-inspired robot that one can ride, I think LW Mononofu is the biggest in the world,” said Nagumo in 2018. In 2019, Guinness World Records officially recognizes LW Mononofu as the largest humanoid vehicle.

Featuring LW Mononofu – will we see more like him soon?